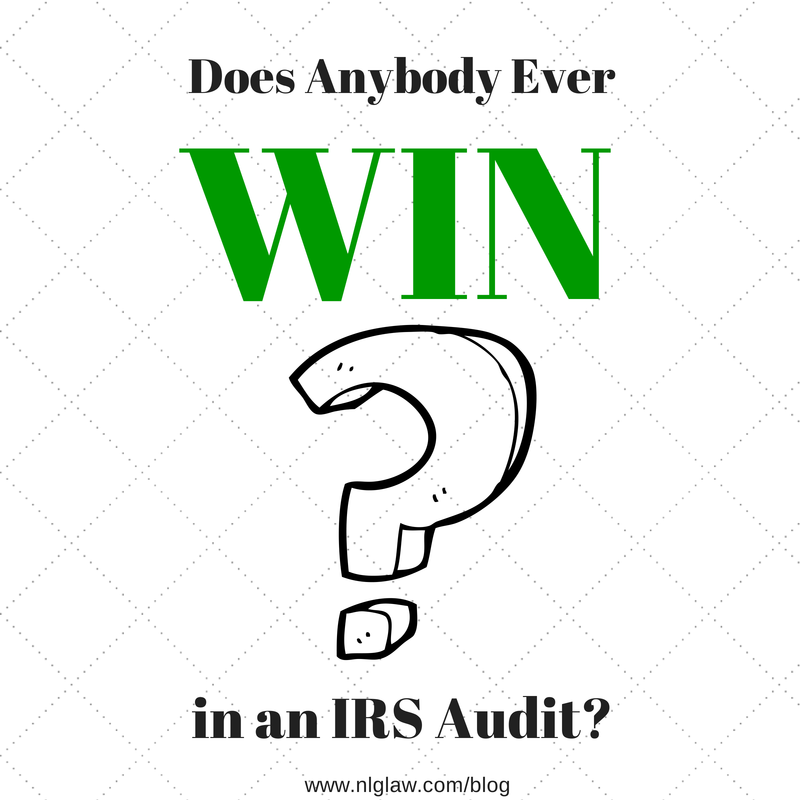 Does Anybody Ever Win in an IRS Audit?

Ever wonder what the chances of winning in an IRS Audit might be? With 1 in 100 taxpayers being selected for an audit, there’s a small chance you’ll find out. But it you’re just trying to get a sense, here are the details.

Approximately 75% of audits are conducted by mail – called correspondence audits. These types of audits are very straightforward and there’s very little room for “negotiation” on whether or not the matter will be “bent” in your favor. Expect that the question posed will be very specific and the IRS audit letter will generally ask for supporting documentation. If you have the information, provide it and you win. If not, you lose.

The remaining 25% of audits are either field audits (conducted in person) or random audits (the most invasive of all). Unlike correspondence audits where the issues are clear, field audits typically involve multiple issues and the details may not be clear. In some cases, information may suggest that entries on the tax return could be erroneous. When that’s the case, the field auditor’s job is to determine whether or not the information is accurate.

So a field auditor’s primary job is to resolve unanswered questions about the return. But beware. My experience is that field auditors are generally good people just trying to do their job. However, they have also been trained to look for issues. One former IRS tax attorney recently told me that it was “always” possible to find a “tax issue” even if one didn’t exist because the tax code was so complicated. Another current IRS Appeals Officer (the person who hears IRS appeals if you don’t like the outcome of the initial audit) told a colleague that he had tried to be fair and objective with taxpayers – he was reprimanded for doing so and told to focus on maximizing collections. It’s tempting to think the IRS will be objective but the cold truth is that they’re the opposing party. They are not on your side when it comes to your money.

The Tax Court is usually much more favorable to taxpayers so long as the position taken by the taxpayer is reasonable. But the cost of getting that far is significant and most taxpayers don’t have the stomach to wrestle with Goliath (the IRS) that long.

So when it comes to a field audit, the best strategy usually involves pushing back a reasonable amount, but anticipating that you’ll need to compromise so the IRS Agent gets a “win” as well. That way, the audit is usually resolved faster, the IRS Agent can close the case and move on (something they’re under constant pressure to do) and you get to move on as well. It’s unfortunate, but true that IRS Audits are rare – even when the taxpayer’s right which is often the case – because of the emotional pain and financial cost involved in establish your position.

If you’re audited, you’ve got some decisions to make. Do I fight or do I cave? Do I handle it myself or do I use a professional? To name just a few. But at least you’ll have a better sense of what’s involved and what your chances are. And my strong recommendation is to use a professional. It substantially increases your chances of prevailing and in many cases can also significantly reduce the financial cost of the matter because a tax professional can likely make a better case than you can to reduce or eliminate any negative tax changes.

If you’ve been faced with an audit and have questions, contact us today to schedule your free consultation. Call (480) 888-7111 or submit a web request here.